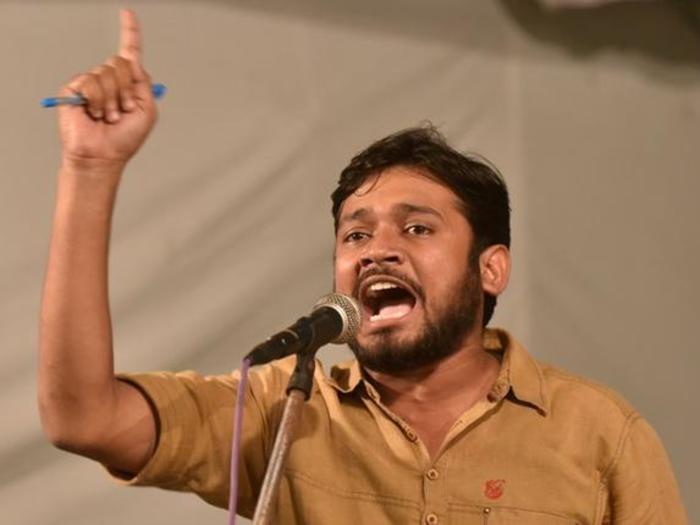 JNU, WE JOIN YOU!

What is nation? What is treason?

Join RSYF In solidarity With the protesting students and teachers of JNU
on 3rd March-2016, near Valluvar Kottam Chennai, at 10AM!

RSS Hindutva fascists continue to ravage JNU by unleashing an array of false propaganda, violent attacks and false allegations of sedition against students. But all these cannot check the determination of students to confront the saffron forces. The massive procession held by more than 20,000 students on 18th of February shook the whole of New Delhi. Not only from India, students unions of American and European universities also have come out in open support of the JNU students and faculty. Intellectuals all over the world including P.Sainath, Noam Chomsky and many Nobel laureates have expressed solidarity with the JNU students. But alas! there is no one in the whole world to give a helping hand to our globe-troting Prime Minister Modi, not even a single party in this large country supports fascist measures unleashed by his government in JNU.

JNU is one of the most prestigious universities of the world. Students from various parts of India consider it as their ultimate destination for knowledge. No other university in India retains such a democratic structure as JNU where university administration, faculty and students have equal saying in managing the institution. Many debates and protests concerning the social, economic, political and cultural issues proclaim the democratic spirit prevailing in JNU. JNU was one of the most prominent places from where huge protests erupted against imposition of emergency in 1975. The present Modi government has imposed an undeclared state of emergency against the people of India by its brutal oppression of students, peasants and workers. It is exactly this state of undeclared emergency that the students of JNU are relentlessly protesting against. ABVP could not even score a decent vote share in the JNU students union elections even though their guru Modi is in power at the centre. These are more than enough reasons for the Brahminical fascists to falsely brand JNU as the hub of anti-nationals!

This is the fourth such attempt by Hindutva fascists to saffronise higher educational institutions of this country with their brahminical agenda. These very same forces made IIT Madras administration to derecognise Ambedkar Periyar Study Circle (APSC) a few months ago. But they had no other option but to retreat in the wake of militant demonstrations by revolutionary organisations in Tamilnadu and wide-spread support to APSC from all over the world. That happened to be the first deathblow to the saffron groups from this land of Periyar’s self respect movement.

In the case of IIT Madras, some Brahmin faculty members wrote anonymous letters alleging that “anti-nationals” were operating from IIT campus, and BJP Government wasted no time to ban APSC. Similarly, BJP central minister Bandaru Dattatreya just wrote a note to MHRD alleging that “anti-nationals” were present in Hyderabad Central University, and immediate disciplinary action was initiated against the Ambedkar Students Association, leading to forced suicide of Rohit Vemula. The same good-old slogan of “anti-nationals” was repeated once again in JNU, and JNU students union president Kanhaiya Kumar was arrested, sedition charges were framed against the students and brutal oppression unleashed against them.

The main charge against JNU students is that some of them opposed hanging of Afzal Guru. However, this is not the first time that death sentence has been opposed. Tamil Nadu witnessed large scale protests against death sentence for the convicts in Rajiv Gandhi assassination case. Morever, many lawyers, judges and intellectuals have described Afzal’s hanging as an utter injustice. Even the Supreme Court of India confessed that there was no evidence to prove Afzal’s direct involvement in the parliament attack, and that it was awarding death sentence only to satisfy the “collective consciousness” of India. Now everyone including P.Chidambaram acknowledge this truth.

Truth could not be concealed for long, the video, slogan shouting, sedition, everything was proved to be blatant lies of RSS, fabricated from the cries of ABVP rowdies wearing masks. Then they charged that JNU student Omar was a muslim terrorist. But everyone from his family to fellow students say he is an atheist and a communist! They alleged that Omer had visited Pakistan, but he has no passport! A BJP MLA brutally attacked Kanhaiya Kumar on the premises of Patiala court itself and the police projected this incident as a work of a few isolated rowdies. But the MLA himself confessed that he is the one who attacked the student. After all these didn’t work out, MHRD minister Smriti Irani told parliament that JNU students called goddess Durga “a sex worker”, only to be disproved again! Each of these distorted charges against the JNU students was proved to be false propaganda by the Hindutva fascists.

After all, what is a their real motive? They want no Ambedkar, no Periyar, no communism or leftist thought, and no rational or scientific thinking in our universities. What else one can expect from the descendants of Hitler? These are the very same Hindutva fascists who murdered Dabholkar, Pansare and Kalburgi who unmasked the real face of Hinduism.

These fascists lynched an innocent Muslim man to death in Dadri on false charges of keeping beef in his home. These castiest and fascist saffron forces passed diktats against inter-caste and inter-religious marriages, and attacked the young lovers. They are against reservation for socially backward sections, oppose government educational institutions and want privatised education meant only for the upper-castes and upper-classes. Imposing Sanskrit as compulsory third language in CBSE, distorting history, erasing distinct languages, practices of worship and cultures of different nationalities in India – all are systematic attempts of RSS BJP Hindutva forces towards constructing a “Hindu-India” which will shelter all the brahminical filth. The noises they make about “National unity”, “patriotism” and the cries of so-called separatists and anti-nationals are certainly empty rhetoric aimed at diverting the people from their real ulterior motive of “Hindu-India”.

The country called India was only a creation of British colonial rulers for administering and oppressing a vast stretch of land with different languages, cultures and religions. Hinduism was invented by forcing this name on people worshiping different gods and practicing different faiths in India towards this purpose. RSS slogan of “Hindu-India” is an urgently needed construct for the Brahmins and Bhaniyas to rule the entire population on economic and cultural fronts. This country is in fact the prison-house of various nationalities, and butcher-house of the oppressed masses. These RSS BJP saffron forces, who are shamelessly raising patriotic slogans, are the ones turning this country into a hunting ground of trans-national corporations.

RSS BJP saffron forces branded Rohit Vemula as an anti-national and forced him to commit suicide. Now they have framed sedition charges against the JNU students, arrested them, brutally attacked them and got 8 students suspended from the University. All the students targeted by the Hindutva forces are from dalit, tribal and working class background. Omer belongs to a poor and humble Muslim family. Not stopping with these atrocities, they now want JNU itself to be closed!

Dear friends, this is not an isolated problem concerning the students of Delhi alone. This Government is an enemy of the students and the entire working class. The Hindu fascists demolished Babri Masjid in UP, and with that pretext burned the entire country. That’s how BJP came to power, and now they are trying to crush the democratic voices for ever. Their attempts to close JNU is an equally poisonous act just like the demolition of Babri Masjid, and we can no longer afford to remain silent!

Tamilnadu and its students have always been in the forefront of all the struggles against oppression and injustice.

on 3rd March 2016, Thursday at 10AM near Valluvar Kottam in Chennai

What really happened in JNU? JNU students come in person to tell us the truth!

Are the students anti-nationals? What is patriotism? Who are the real traitors? JNU students are going to unmask the real-face of RSS BJP!

Revolutionary singer Comrade Kovan will sing in support of JNU students and to drive away the brahminical fascists!

Descendants of Mahisasura, Mahabali, Ravana and Hiranya, come and join with us! Join us to defeat brahminical forces, come to liberate the democratic voices!

JNU, WE JOIN YOU!