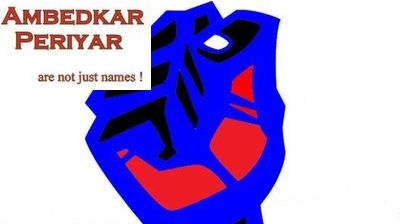 Countering the lies and slanders of the IITM admin….

They say that Ambedkar-Periyar Study Circle violated the code of conduct of IIT? What is that Code of Conduct? Which section of that did you violate?

There is no such code of conduct. There has never been one. Now, they are inventing one to defend themselves against their indefensible action.

They say, that you have misused the name of IITM?

We have never used IIT’s emblem in our posters. We have only stated that this study circle is an Initiative by IITM students, which is a fact. For example, when Presidency college students put out a poster in support of Srilankan tamils, they call themselves as Presidency College students. What else should they say? Similary, we say that we are IIT students. That is all.

People think that IIT students enjoy more freedom than students of other colleges?

Nothing. All the activities of the students are monitored here. In the past 4 years, the number of CCTV cameras inside the campus have increased manifold. They have installed them in all departments. Contracts are given to fit them outdoors too. In hostels, even on the road sides, they are planning to install cameras. You are under alround surveillance here. Your every move is monitored. 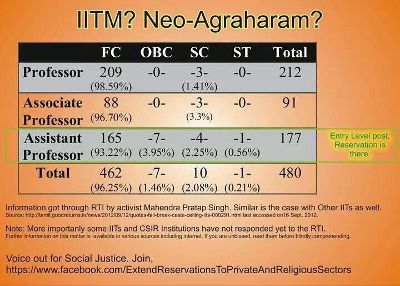 No one takes prior permission here. For example, ISKCON – Hare Rama Hare Krishna – conducts Bhajans every week. They do not go to the Dean of Students every week and seek permission.

Do you mean that right to propagate Hindu belief is sanctioned – not the right to criticize?

Indeed! THAT is the issue. Based on the thoughts of Ambedkar and Periyar we question Hindu religion and its tenets. For them it is intolerable.

You mean, they allow Hindu religeous propaganda or even Hindu communal propaganda?

Gurumurthy keeps coming for talks. He comes to many departmnets and presents R.S.S view points on various issues. He will come to Economics Department, other student bodies, rightwing student bodies for talks.

The institute itself invites him many a times, he will be invited as a Chartered accountant. But the accountant speech would be R.S.S-Hindutva propoganda

To be specific, before the general elections in 2014, when Congress was in power, IITM admin did everything to support BJP. Sangh parivar students even conducted election campaign inside the campus.

It seems, even when Congress was in power, the autonomous IITM was ruled by BJP.

Yes, indeed. Kiran Bedi came before elections (for a talk sponsored by IITM). Winding up her speech, she canvassed for BJP. Yes, she did that openly.

What facilities IITM extends to your Study Circle.

Nothing. IIT does not extend us any facility. We use the class rooms. That too is not provided by IIT admin. Our professor helps us to get the classroom.
For funds IIT never supports us anyway. We invite speakers, print pamphlets and posters only with the help of student contributions.

Yes, no doubt. IIT funded them. Details of these accounts are never made public. Tax payers money used to bring BJP to power.

Did the Dean asked you not to name your study circle after Ambedkar – Periyar? Did he say that explicitly?

Yes. When we talked to him, he said that this name is polarising. He said that it is also politically coloured. “You change the name; choose some sort of a generalized name, something from their thoughts if you wish. Or better choose some other name.” he said. When we tried to put forth our view point, he categorically said, “Nothing to debate. This is an order of the Dean. Better follow my order.” He did use these very words – THIS IS AN ORDER OF THE DEAN

The essence of the whole issue is whatever we did in APSC was against Brahminism. That is the MATTER

On what issues you have conducted meetings?

We have conducted a meeting against Imposition of Sanskrit, inviting a person from Linguistics field. Then against ban on beef, on Ghar Wapsi.
When they started putting name boards in (Sanskritized) Hindi, even the Hindi speaking students could not understand those words. We exposed that this (imposition of Hindi) is a blatant Brahminical, Hindutva fanaticism.
We conducted meetings against Land acquisition bill and labour law amendments.
We have spoken out openly against the anti people economic policies and Hindutva programs. We have also written on them.
All these are against the government at the centre. Infact, this is what they accused us of.

Is it true that IITM refused to conduct a meeting to honour Bhagat Singh?

Yes. Last September, we (APSC) approached the co-ordinator ofExtra Mural Lectures (EML). We emailed him “We should hold a meeting on Bhagat Singh. APSC has no funds, moreover, it would be better if you you conduct the meeting. You can get funds from IITM. We could invite Prof. Chamanlal (the Bhagat Singh biographer)”. But our request was rejected by EML core team as well as the faculty advisor.

A core member of the EML mailed back, “EML is not a suitable platform for this. Better do it on your own”

When we spoke to him, he argued that Bhagat Singh would not be a acceptable person to majority of IIT students. So, this is not needed. This is how he responded.

But, Aravindan Neelakandan (a Hindutva propagandist of Tamil Nadu) was invited to the same platform. It was a meeting conducted exclusively for right wing students. That was funded by IIT.

Yes. That is how it is. You dont have to believe my word. Go to the FB page, type EML and see the list of lectures conducted. Then decide for yourself.

So far, we were talking about right wing hindutva lectures. There is another side to it. The rest of the lectures are all pro corporate.

I will give you one recent example. Recently Kris Gopalakrishnan of Infosys and Yashwant Sinha came to speak.

Krish puts forward his demands to YS. He says taxation is a hurdle, hence should be relaxed, then the labour laws – still a source of nuisance.

Hereinafter, he says no more 8 hours work days, no more monthly salaries etc. The IT sector, he said is getting automated, and preferred to go for hourly wage system. In effect, Krish demands the labour laws to go.

This was also an Extra Mural Lecture funded by IIT. Such corporate lectures and conferences, discussions on how to promote privatization of education etc are a regular phenomena here.

What is the level of support you have gained so far in your struggle?

We have got overwhelming support from intellectuals. A student organization from IIT Mumbai, another from TIS (Tata institute of Social Sciences) have extended their support.

SFI has supported us. Professor Chamanlal has written in support of us. Arundhati Roy has issued a statement in support.

Newyork Times, BBC India and The Guardian have also covered this issue.

It is not just an issue pertaining to APSC. This is an issue faced by students in all institutions of higher learning. IIT Mumbai students shared an experience. They wanted to organize a meeting inviting a lecturer from Kashmir. IIT Mumbai admin stopped the program saying that Kashmir is a very sensitive issue.

A wrong trend indeed. Yet its happening all over India.

Shall we conclude that from APSC to Land Grab Act, Labour law amendments or Kashmir, IITM will encourage only those views that are anti people?

Yes. You can say that. That is how IIT is administered. Its not a secret, inside IIT anyone can come and see this plain truth.