முகப்பு இதர English Our revolutionary greetings to the working people of Sri Lanka! 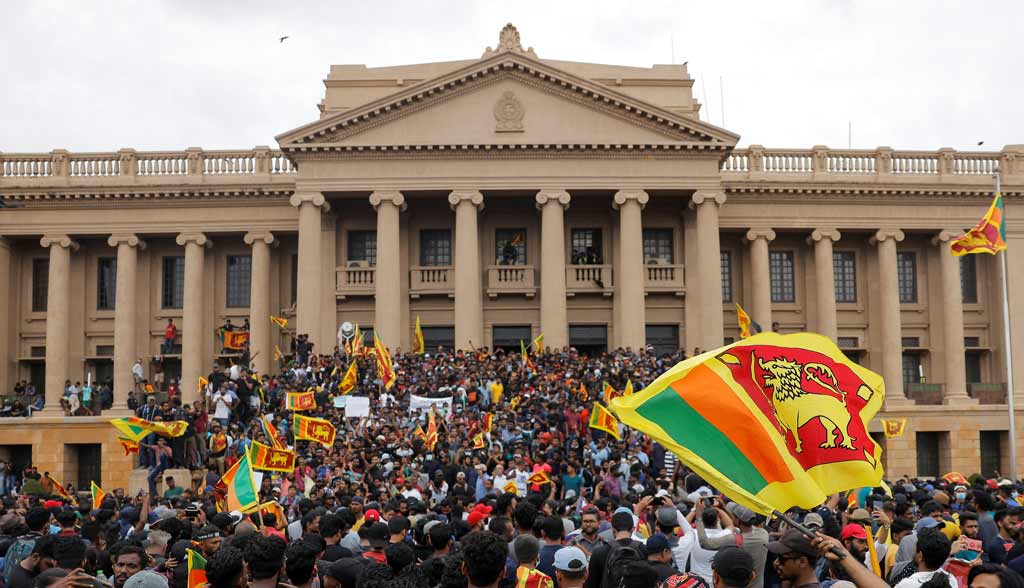 On July 9, the hearts of the revolutionary forces around the world are full of joy after seeing the uprising of the working people of Sri Lanka. The stomachs of the fascists around the world, like the Rajapaksa gang, would have churned on thinking about their future.

On 09-07-2022, on the occasion of the 90th day of the Galle Face protest, the protestors had given a call for a nationwide protest. Based on that, as part of the nationwide protest held on July 9, tens of thousands of people gathered and besieged the Presidential Secretariat. They have kept it under their control till now. At the same time, Prime Minister Ranil Wickremesinghe’s house in Colombo was also besieged by the people and was set on fire. Gotabaya escaped from the Presidential Secretariat with the help of the army. His whereabouts is still unknown.

The events that took place at the time of the capture of the Presidential Secretariat and Gotabaya’s official residence, the Allari Palace, were soothing.

People who entered the Allari Palace enjoyed jumping and swimming in the swimming pool. They went inside the kitchen and ate the stored food. They sat on chairs. They tried lying on the luxurious bed. It is important that the people who displayed their triumph in this way did not damage any of the property there.

Moreover, the people recovered the currency notes (1.78 crore Sri Lankan Rupees) stashed in the house of Gotabaya and handed it to the security units. It is a whack to the propaganda of the ruling classes which portrayed the struggling masses as aimless, violent and anarchic tyrants.

Gotabaya Rajapaksa has officially announced that he will be resigning on the 13th due to the pressure created by the popular uprising. Moreover, Ranil Wickremesinghe has also announced that he will also resign to assist the formation of an all-party government. The ministers who had taken charge under his leadership have been announcing their resignations one by one.

On 05-07-2022, ahead of the 90th day of the Galle Face protest, the protestors had issued a six-point action plan. The primary demand was that the Gotabaya-Ranil government should resign. Sri Lankan people have achieved this through the uprising.

However, decisive victory in the revolutionary struggle can be accomplished only through the seizure of political power. In that aspect, the working people of Sri Lanka are at a critical juncture of ensuring their success.

Sri Lanka is shaking due to the popular uprising. At the same time, hegemonic vultures including the US, India and China are encircling Sri Lanka. They are preparing an alternative plan to sustain their hegemony.

The US has demanded to work quickly to identify and implement solutions that will achieve long-term economic stability and address the Sri Lankan people’s discontent.

The International Monetary Fund has said that it was continuously and closely monitoring Sri Lanka’s economic progress and is ready to assist Sri Lanka.

Indiscriminate firing is being carried out on the struggling people. Journalists covering the protests have been severely beaten up by the police. Army Chief appeals to the protesting people to come forward to cooperate with the police and the army in order to establish ‘peace’.

We must make note that the political power is still under the control of the ruling classes. On one hand, the ruling classes are oppressing the struggling people with the police and the army. While on the other hand, they are trying to save the existing State structure that serves them by disguising in the name of ‘all-party government’ and ‘elections’.

The revolution has to move forward in the direction of establishing the political power of the working people by overcoming these oppositions, recognizing the autonomy of the nationalities, abolishing imperialist plunder and building a self-reliant economy. In the meantime, the diversions, manipulations and phony solutions of the ruling classes have to be exposed and defeated. This duty belongs to the Sri Lankan revolutionary forces.

In that way, the new democratic Marxist-Leninist party operating in Sri Lanka has conducted various opinion campaigns among the people. The party and its mass gatherings have participated in mass protests in support of the Galle Face declaration. We welcome the party’s continuous efforts to involve the Tamil people of the Northern Province in this movement.

The recolonizational policies of privatization-liberalization-globalization advocated by the ruling classes had miserably failed. A path towards socialism is the only path of deliverance for the people of Sri Lanka. In order to move towards that direction, the working class must focus on conquering the political power.

Another ‘saviour’ may be proposed by the ruling classes, as Ranil was proposed as an alternative to Mahinda. The working people must reject such bogus solutions. An interim government dominated by the revolutionary classes including workers and peasants should be formed immediately. Then only the struggle can further advance.

The Galle Face declaration issued on 05-07-2022 has made demands including an ‘interim government’ and a ‘new Constitution with people’s participation’. The active intervention of the revolutionary forces is necessary to overcome the distractions of the ruling classes and to fight for the firm implementation of this declaration.