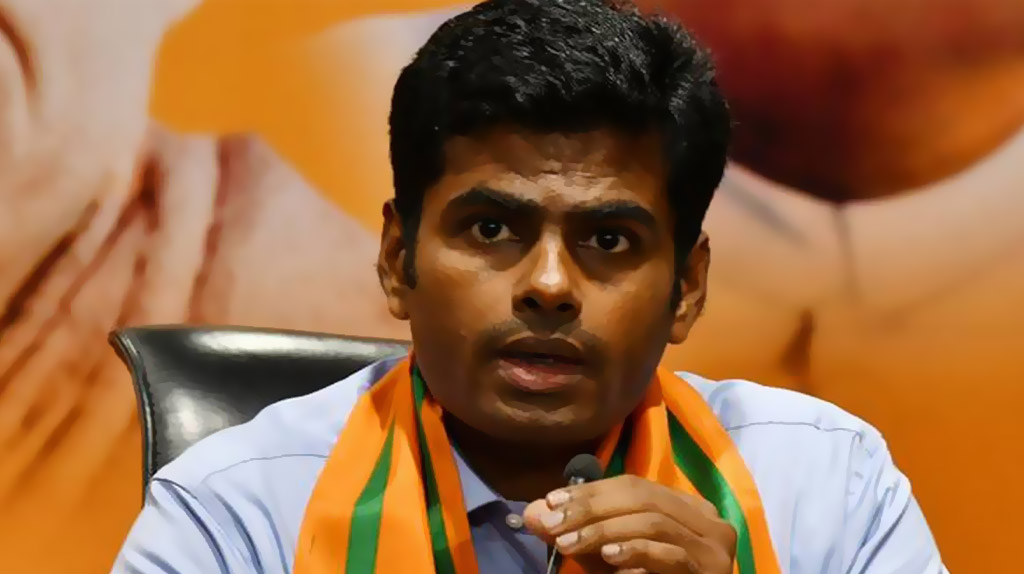 In Tamilnadu, intellectuals and progressive-democratic forces have been consistently saying that “This is Periyar’s soil. The RSS-BJP won’t gain foothold even if they stand upside down”. We have the right to think high of Tamilnadu, which had incessantly fought the brahmanical ideology throughout its history. But, speaking like this is a dangerous trend and it underestimates the fascists and hides our inaction. It is because of this inaction that fascism is slowly taking root in Tamilnadu. To understand this, it is necessary to review the activities of the RSS-BJP with a little consideration.

The suicide of Lavanya, a student from Ariyalur, was a rare opportunity for the BJP, which was waiting like a hawk to incite communal riots in Tamil Nadu. Lavanya, a Class 12 student of Sacred Hearts Higher Secondary School in Michealpatti, in Thanjavur district committed suicide on January 19. The RSS-BJP claimed that Lavanya, a Hindu, committed suicide due to forced conversion and turned the student’s death into a trump card for its evil religious fanaticism.

This issue went viral after the BJP President Annamalai shared a video on his Twitter handle, in which Lavanya can be seen saying that conversion was the reason behind her suicide. Sangh Parivar organisations like Vishva Hindu Parishad (VHP), Hindu Munnani, Akhil Bharatiya Vidyarthi Parishad (ABVP), including the BJP, came together and protested to “close down the Christian school and bring in a law in Tamilnadu banning conversions”. Prayer houses and churches were attacked in Madurai, Coimbatore and Ramanathapuram.

The saffron mob bent Lavanya’s parents according to its intentions. For two days, they protested without even receiving the girl’s body from the hospital.

♦ NEET Exam : The experience of legal struggle teaches the need for field struggle !

Lavanya’s father Muruganandam lodged a complaint with the police alleging that his daughter committed suicide because that she was forced to convert and filed a petition in the Madurai High Court seeking a CBI probe. But the saffron mob’s moves can be understood from the fact that the complaint lodged with the police on January 15 earlier did not mention “conversion”. The BJP had made the family to file a case in the Supreme Court by spending money.

In fact, it was later revealed that the girl had committed suicide because of her stepmother’s cruelty and the excessive workload imposed by the hostel warden. It was revealed that in an earlier video circulated by Annamalai, Muthuvel of VHP was the one who asked the girl whether she was forced to convert and that the video was cut and circulated as per their intent. Lavanya’s statement to the district magistrate also confirmed that conversion was not the reason. After getting all this evidence, the democratic forces exposed the RSS-BJP and tore their faces.

But the BJP-RSS’s attempt can’t be considered a complete failure. The RSS-BJP tried to turn Lavanya’s suicide into a tool to implement their saffron fascist agenda in Tamilnadu. For this, even their national leaders paid direct attention.

National President of BJP J.P. Nadda himself intervened and set up an enquiry committee. The saffron mob created the hashtag ‘Justice for Lavanya’ and made the incident a topic of discussion across the nation. The old Tamilnadu House in Delhi was besieged by the ABVP. Chief Minister Mk Stalin’s residence in Tamil Nadu was also under siege. The ABVP also staged protests in Shimla, Jammu, Gorakhpur, Bhopal and other parts of the country.

They tried to pressurize the DMK by creating attention at a national level. It is to be noted that the Madurai High Court and the Supreme Court helped in moving the case in the direction desired by the fascists. As a result, they have succeeded in their plan to transfer the case to their puppet, the CBI.

Justice G R Swaminathan of the Madurai High Court, who gave the Deshbhakt Award to Maridhas, handed over the case to the CBI and ordered an investigation. What he said during the trial was important.

The judge didn’t condemn the RSS-BJP, which protested under the false propaganda of forced conversions and attacked churches and tried to orchestrate a riot in Tamilnadu by using Lavanya’s death. Instead he condemned SP Ravali Priya who said there was no evidence to prove that conversion was the cause of the death. The news spreaded on the social media that Lavanya had earlier contacted the child protection centre as she could not bear the harassment of her stepmother, in the view that her stepmother might be responsible for the death. Pointing out at this, the judge condemned it as “an act of disrupting the investigation”.

But during the trial, the judge spoke like a member of the Sangh Parivar as if conversion was the reason behind the student’s suicide. Referring to the Conversion to Christianity in the Hindi film “Serious Men” and the Tamil film “Kalyana Agathigal”, he said, “while movies, particularly, Tamil movies are notorious for melodrama and exaggeration, they do contain a kernel of truth”. He also suggested that someone could undertake an exercise into how the area “Michaelpatti” acquired its name.

Annamalai declared that the transfer of the case to the CBI was a victory for the BJP’s struggle. Even though the disharmony campaign of conversion openly disrupted the peace in Tamilnadu, the DMK government did not dare to arrest and imprison the BJP leaders including Annamalai and H Raja. There has not been much debate among the intellectuals about the judiciary being a puppet of the saffron mob.

The recent incident in Coimbatore is a good testimony to the infiltration of saffrons not only in the judiciary but also in the police department. During a meeting organised by ‘Kovai Makkal Otrumai Medai’ at Sivananda Colony on the death anniversary of Gandhi (January 30), members of various outfits including CPM, VCK and TPDK planned to take a pledge under the theme “Let’s pledge to organise people against Hindu fanaticism”.

Coimbatore police, who entered the function, tried to remove the flex banner with the slogan “Gandhi was killed by Hindu fanatics”. There was an argument between the crowd and the police over the issue and then the meeting had to be held only after hiding the word ‘Hindu’ in the text.

In the function that followed, CPM Politburo member G Ramakrishnan recited that the father of the nation “was shot dead by Godse” and RSS “terrorists”. Rathinapuri Inspector Ramesh Khanna had argued that the the references to Godse and the RSS could lead to “law and order issues” and should not be used. Democracy is being denied by the police just because the well-known truth disturbs the minds of the saffron thugs.

But it was during this period that there was a thrilling debate over Chief Minister M K Stalin’s tweet — “No place in Indian soil for Godse’s heirs and their evil thoughts”.

When Modi visited Punjab, the BJP claimed that there was a “security lapse” and protested throughout India. Muthusamy, a trolley fruit vendor, was brutally attacked by the BJP functionaries in Palladam area of Tamilnadu till he fainted in front of the police for criticising Modi during a human chain protest. This incident can be seen as an expression of fascist rowdyism. Similar was the attack on the churches in areas like Ramanathapuram and Coimbatore on Lavanya issue.

We cannot forget that when farmers’ unions burnt an effigy of Modi and protested against the massacre of farmers in UP’s Lakhimpur Kheri, BJP disputed that “if Modi’s effigy is burnt, we will burn Lenin’s effigy in return”. During the local body elections, a Muslim woman wearing burqa in Madurai’s Melur area was threatened by a BJP booth agent and was asked to remove it. These are only significant activities of the RSS-BJP.

The saffron fascists are making efforts to gain a foothold in Tamilnadu more vigorously than ever before; They are growing gradually. But the DMK, which was supported by democratic forces as a force that will oppose the RSS-BJP in Tamilnadu, made no attempt to stop the activities of the RSS-BJP; except for the talk.

Apart from not stopping, the DMK is supporting the growth of fascism. The actions of the Hindu Religious and Charitable Endowments Department is a good example. The DMK has appointed RSS supporter Ramasubramanian as a non-official member to the Advisory Committee of the HR & CE Department.

Though he has been a vocal critic of the BJP, he always proudly identifies himself as a “RSS cadre”. In a media interview, he said, “Illam Thedi Kalvi scheme requires volunteers from the RSS”. From this one can understand what he will do with his office in the department of HR & CE. Moreover, on the Thillai Nataraja Temple issue, he said, “Thillai temple is the property of Dikshitars (brahmin priests) and it is right to throw her (Jayasheela) out of cithrambala medai”. It was him that the “Dravidian” DMK had appointed.

The latest evidence is the action of Sekar Babu, who organised Mahashivarathri celebrations on behalf of the HR & CE Department this time to compete with Jaggi Vasudev. Durga Stalin, wife of the Chief Minister, inaugurated the Shivarathri special programmes held at the Kapaleeswarar temple by lighting a kuthuvilakku (lamp). Rudraksha and Theertham are free for the devotees who attended.

Sekar Babu’s announcement was opposed by the DMK allies like VCK and CPM. “Organising religious functions and carrying out religious propaganda by the government itself is against dravidian ideology” the Deputy General Secretary of VCK Vanni Arasu condemned it. DK leader Veeramani, CPM’s K Balakrishnan and many others condemned this act.

During the local body election campaign, TN BJP President Annamalai said, “We are the opposition in Tamil Nadu. The DMK has been criticising the BJP for whatever they do. We are also criticising Dravidianism. This is an ideological fight”

It’s true. Ideologically, the fascists are on the rise. The DMK is a victim of it, not its competitor. If the danger of saffron fascism is to be defeated at the outset, both ideologically and practically, the revolutionary and democratic forces of Tamilnadu must act vigorously. On the contrary, it is a dangerous trend to stay afloat in the ‘golden age’ spell and just mocking at the RSS-BJP. 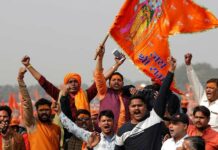 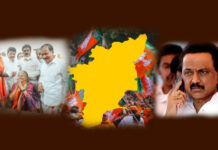 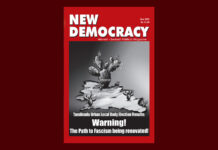