We are living under the clutches of an evil regime. Does this regime allow the working people to lead a peaceful life? Our life is being ruined because of the rise in prices of essential commodities, increase in taxes, unemployment and loss of livelihood due to destructive pro-corporate policies!

Domestic LPG which was sold at Rs. 410 in 2014 has now almost touched the Rs. 1100 mark. Petrol which was sold at Rs. 66 had crossed Rs. 100. The people can’t even afford basic goods like rice, pulses, milk and curd. The prices are galloping because of GST. Though the prices continue to rise, the salaries remain the same. More than 20 crore people sleep hungry every night as they can’t afford to cook.

Within one year of the implementation of GST, one-fifth of the MSME businesses fell into the abyss. The retail businesses are facing a disaster because of the government’s decision to allow 100% FDI (Foreign Direct Investment) and the encouragement of e-commerce penetration.

The backbone of the farmers had been fractured because of the hike in prices of agricultural inputs, inadequate procurement prices, acquisition of the farming lands to hand over to the corporates in the name of development and the planned cut in agricultural subsidies; and the farm laws were being amended in order to corporatize the farming sector.

The Modi government, which introduced servitude contractual schemes such as NEEM and FTE, amended labour laws with the sole aim of snatching away the rights of the labourers.

The rate of unemployment is at a 40-year high. According to a statistic, 43.7% of the job seekers are youngsters between the age group of 20 to 24 years. During the first seven years of the Modi regime, student suicides rose by 55% and the suicides of the unemployed rose by 58%. The suicides of the farmers and the daily wagers rose by 139.37%. This fascist regime is pushing us towards suicide.

The RSS-BJP is hiding its anti-national activities and is provoking religious fanaticism by projecting Muslims as the enemies of the country and religious conversion as the biggest threat.

The saffron thugs are orchestrating riots by targeting the Muslim populated areas and are openly calling out for genocide. In the BJP-ruling states Muslims are prohibited from wearing hijab, Azan is banned and Muslim vendors are being prohibited from conducting businesses. If they fight against these injustices, their houses are being bulldozed. Muslims are being turned into refugees in their own country. Various laws such as Citizenship Amendment Act, love jihad law, Cow Protection Act, Prevention of Damage to Public Property Act have been brought with the sole purpose of suppressing the minorities.

Those who oppose the RSS-BJP are annihilated lawfully. 16 members, including advocates, professors and social activists, were arrested by the police using a doctored letter and a cooked up story of ‘conspiracy to kill Modi’; the arrest of Teesta Setalvad, who accused Modi in the Gujarat pogrom; the arrest of the Alt News founder Zubair, who exposed the fake news propaganda of the RSS-BJP; it was made as a rule that sedition and UAPA will pounce upon anyone who speak against Modi.

The true benefactors of the RSS-BJP regime are the corporates; that too in particular Adani and Ambani. In the last 10 years, the value of assets of Adani rose by 1830% and Ambani by 400%. Modi’s foreign trips had won many international contracts such as coal mines in Australia, power project in Sri Lanka to Adani-Ambani. Adani, who was in the 313rd position in the Hurun global rich list, had moved to the 12 position due to Modi’s efforts (According to Hurun India Report). 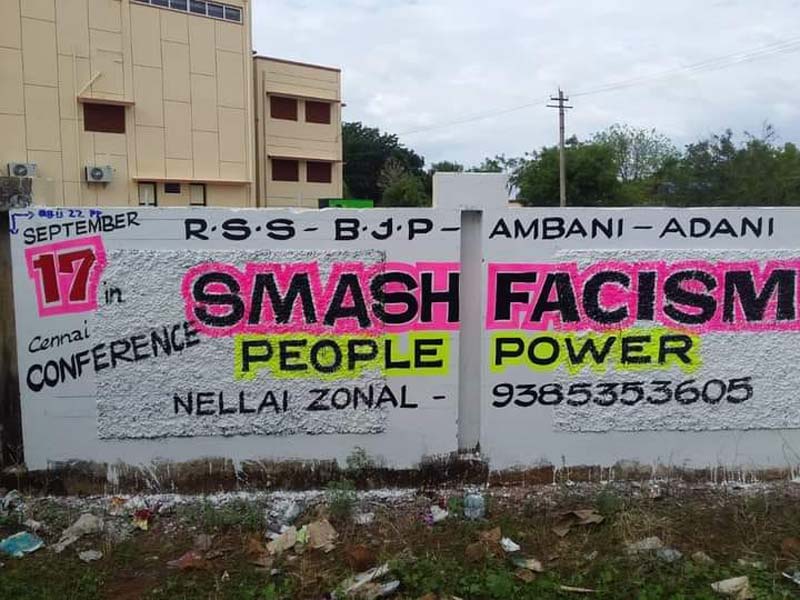 Public assets, i.e., from ports, airports, coal mines to the 5G spectrum, are being sold to a very few corporates such as Adani, Ambani, Tata at cheaper rates. Amending various laws such as the Farm Laws, Labour Laws, Environmental Impact Assessment and allowing FDI in retail businesses and military, National Monetization Pipeline are being done to ease the plundering of the corporates.

The recolonizational policies of liberalization-privatization-globalization were imposed by the imperialists in the 90’s. These policies were designed to stop the governments from being welfare States and direct them to act only as brokers to the corporates. The corporates including Adani and Ambani unanimously back the fascistic BJP regime led by Modi knowing well that it will ferociously implement these pro-corporate policies. That’s why 82.5% of the election funds of the corporates is being donated to the BJP.

The BJP is not just another vote bank party. It is the political wing of the RSS, a fascistic-terrorist organisation. Its aim is to establish a Hindurashtra by dividing the people into hundred bits along caste lines and thereby modernizing the brahmanical dominance and caste hierarchy. On the other hand, the aim of Adani and Ambani is to exploit the natural resources and the people and contest in the world billionaire race. These saffron fascist groups have partnered among themselves and are enforcing a fascist rule.

In order to assist their aforesaid two aims, all the sectors including the judiciary, Election Commission, CBI, Reserve Bank, police, military are being filled with RSS-BJP cadres. Not only the parliament, but also the entire State structure has been occupied by the fascists.

Many judgements such as the Babri masjid judgement, hijab verdict, Gujarat pogrom judgement were pronounced in favour of the saffron mob and against the Muslims; It is not new that the CBI is being used against the members of the opposition parties and the cases are being dropped if they defect to the BJP; It is historical that the Reserve Bank had transferred the emergency funds to the BJP government; A statistic reveals that 50% of the police force is anti-Muslim; the administrators in the corporate companies are being appointed in various government departments as Joint Secretaries and Directors.

Can this be overturned if we just bring another political party to power? The track record shows that the BJP had captured power in 10 states by horse trading of the MLAs. Haven’t the RSS running parallel governments in the states ruled by the opposition by appointing governors like R.N.Ravi?

Therefore, the RSS-BJP, Ambani-Adani fascism can only be brought down by a popular uprising outside of the electoral system. We should protest by organizing the working people including the labourers, farmers, micro-small scale businessmen, students and the youth. It is the only way to defeat fascism!

Let’s unite as Anti-Fascist People’s Front to bring down the RSS-BJP Ambani-Adani Fascism!

Let’s get away from this illusion of pseudo-democracy! Let’s create an anti-fascist uprising! 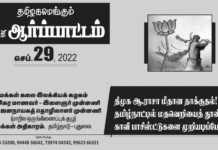 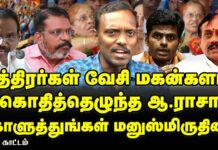 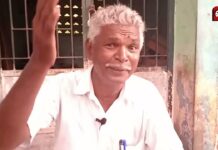