Last May 18 was the commemoration of Mullivaikkal Remembrance Day. It was in 2009, when the Sinhalese military committed the genocide of Tamils along with the LTTE. That May was unforgettable. After 13 years, this May is a notable one to the people of Sri Lanka. The previous May was painful and a permanent scar. But this May is a ray of hope.

Mahinda Rajapaksa, who led the Sinhala chauvinism and killed lakhs of Tamils, was now forced to resign and go underground.

The uprising of the working people beyond ethnic divide is an ecstatic moment for the revolutionary-democratic forces who strive to build a new democratic Sri Lanka.

In this situation, Tamil fanaticists from Sri Lanka and Tamil Nadu are now discussing about the demand for a separate Tamil Eelam. (They carefully stop at the level of “discussion”. Let’s explain this in the last).

But till now, they haven’t got rid of their filthy ethnic fanatic view which rejects class unity. So, it is now imperative for us to speak about the path to get justice to the genocide and the path to attain autonomy.

Also Read : Communal attacks during Hindu festivals: The next leap of saffron terrorism!

In the November 2013 issue of Puthiya Jananayagam magazine, an article entitled “Eelam: The Political Illiteracy of Tamil Ethnicists” was published. In that, our stance was explained shortly. An excerpt of it is given below, considering its relevancy.

“PALA (People’s Art and Literary Association) is only opposing that establishing a separate State is the only solution for Eelam issue regardless of the situation. But PALA is not against a separate State of Tamil Eelam. This remained our stance from the beginning. It is possible for the Tamil Ethnicists to argue that “Then why didn’t PALA struggle for a Republic of Tamil Eelam?”

PALA didn’t vouch for a separate State of Tamil Eelam for two reasons. In the view of Tamil Ethnicists, a separate Tamil Eelam is their only demand and the only solution; that’s why, they always put forward that demand. It is a petty bourgeois, irrational, myopic perspective of nationalism based on ethnic fanaticism.

But PALA’s perspective is scientific and is from the view of the proletariat. We stand for the right to self-determination of the Tamils, which recognizes the right to secede. We are initiating the struggle for that.

We are not setting aside the right to secede and only recognizing the right to autonomy. That’s why we are not struggling by putting forward the demand for the formation of Republic of Tamil Eelam.

Tamil ethnicists are demanding that we should protest only for the establishment of a separate Eelam. We can’t vouch and should not vouch for that, as we are communists. The fascist regime of Sri Lanka is not only against the oppressed nationalities but also the oppressing nationality. We can’t fight separately by forming separate Communist Parties for separate nationalities. A revolution is not possible with such party programme. Winning a revolutionary war separately and establishing socialism separately and uniting with other nationalities before or after that is not a Marxist-Leninist view.

Forming a single revolutionary party against the fascist regime; providing not only equal rights for all nationalities but also recognizing the right to self-determination along with the right to secede. That party should campaign among the Sinhalese about the right to autonomy of the Tamils and the necessity to harmonize with the Tamils. By doing this, the various nationalities are united under the leadership of the proletariat and thus finishing the New Democratic Revolution. This is the Marxist-Leninist view.

The people of Sri Lanka stood united in the fight to vacate India’s occupying force. When the political-economic crises worsened due to continuous civil war, and when the Tamils demanded the same, Chandrika Bandaranaike Kumaratunga faced the Presidential elections by articulating the same. The Tamils and Sinhalese stood united while electing her in support of peace, armistice and peace talks. But it got spoiled in the midway by the Sinhalese ethnic fanatics. They stood united while facing the devastation caused by tsunami in 2004.

There were Sinhalese like the wife of Nadesan (Nadesan was the Political Leader of the LTTE), who got killed in Mullivaikkal, and other outfits consisting of members from both the Sinhalese and the Tamils. They accept the autonomy of the Tamils. There are Sinhalese who fought for the human rights of the Tamils against the fascist government and got killed. During the Eelam liberation struggle, not only the Tamils but also several thousands of Sinhalese youth were also killed. The witch-hunt on a white van against them still continues. The UN Human Rights Council had accused the then fascist government for the disappearance of 75,000 Sinhalese youth.

That’s why the unity of Tamils and Sinhalese for political reasons is not an impossible one.”

Yes. On that day we said “not an impossible one”. Today, we are seeing it happening right in front of our eyes.

The protests are still going on with demands such as “Gotabaya should resign; Mahinda who attacked protests should be punished”. In this protest against the Rajapaksa mob, the demand to punish them for the crime of genocide of the Tamils and the demand for autonomy of the Tamils should also be added among other demands. This is the apt time for the Tamils to fight by putting forth their demands. They will definitely attract the strong support of the Sinhalese working people.

But the reality is different. The struggle is going on relentlessly in Southern Sri Lanka, where Sinhalese form the majority. Protests are very minimal or absent in the northern and eastern parts of Sri Lanka which is densely populated with Tamils.

Various reasons are being told for this. It is said that power cuts and shortage of fuels were not new to those areas and the Tamils had adapted to that. Moreover, the northern and eastern parts where the Tamils live are fully militarized. After the genocide Tamils are afraid to participate in protests against the State. These are all the reasons being told; but these reasons can’t be considered primary.

None of the small outfits (there may be exceptions like some revolutionary-democratic organizations) organized the people to protest. They didn’t intent to do that. This is the primary reason. In particular, we are saying about Tamil ethnicists. 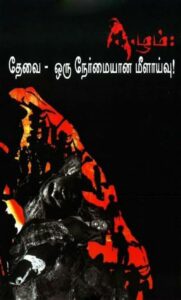 Not only now, the Tamil ethnicists throughout the history of Sri Lanka had never stood for the common demands of both the nationalities. They only take up ethnic issues, that too with a myopic view, and for their subsistence.

The people were protesting by crossing the ethnic and religious borders. So when we listen to the Tamil ethnicists, it would be difficult to control the anger.

A Tamil ethnicist named Thirukumaran in an interview to a YouTube channel said “The Sinhalese are protesting for three meals a day. They can’t live without three meals a day and AC. They had never protested for the sake of Tamils and the Tamils should not believe them”. This is not only an act of sheer folly but also in synchronous with various Tamil nationalists.

“(In the north) we are not protesting for food. We are protesting for justice”, writes a digital media named “Tamil Guardian” which was run by a Tamil Nationalist.

Similarly, the editor of another digital media “Tamilnet” writes, “It is not appropriate for the Tamil nationals to align with the Sinhalese nationals in the wake of the prevailing economic crisis”  …   “Joining hands with the Sinhalese to save the economy of a nation which committed genocide is like refusing the genocide itself”.

Not only the aforementioned digital media, several other websites and blogs run by Tamil ethnicists such as “Koormai”, “Eelamview” sang in the same tone harmoniously.

Sivagnanam Shritharan of the Illankai Tamil Arasu Kadchi (ITAK) spits ethnic poison: “Tamils are the ones who faced economic crises since the 1990s. We, the Tamils are experiencing this for over 20 years. The Sinhalese are now only starting to experience”.

There is a class enclosure hidden behind this ethnic outcry. It is the elite impudence. They are wearing the Tamilian mask and ingesting Tamil ethnic fanaticism among the Tamil proletariat.

While the Sri Lankan and migrant Tamil ethnicists speak this directly, Tamil ethnicists of Tamil Nadu speak covertly. They are not speaking in opposition to Rajapaksa or about the necessity for the Tamils to join hands with the majoritarian Sinhalese to fight the crisis. On the contrary, they are still speaking that the Tamils can’t unite with the Sinhalese.

Those who say that Tamils should not worry about food could have utilized this situation to organize the Tamils to protest for Eelam issue. But they didn’t do so.

The thing to be noted here is that these mobs are the ones who preserve the Sinhalese ruling class and the State structure by separating the Sinhalese and the Tamils by strengthening the ethnic divide.

These people require ethnic fanaticism to survive for the purpose of retaining Parliamentary privileges and to receive funds from the Eelam Tamils who live abroad. That’s why they view class unity as a hurdle.

The ethnicity identity politics won’t survive for long before the cyclone called class struggle. Tamils are exclaiming that “we had understood the Sinhalese, only now”. The Sinhalese are commemorating the memory of Mullivaikkal massacre. A situation in which the Tamils and the Sinhalese could unite has arrived. Divisive politics won’t work anymore.

Tamils will not surrender to the ethnicity identity politics. It gives us hope that the student organizations and the trade unions of the northern region are attempting to unite in the struggle with the people of Southern Sri Lanka.

It is only the united class struggle of the Sinhalese and the Tamils that can liberate Sri Lanka from the clutches of Imperialism and exploitation; Tamils too will win their autonomy.