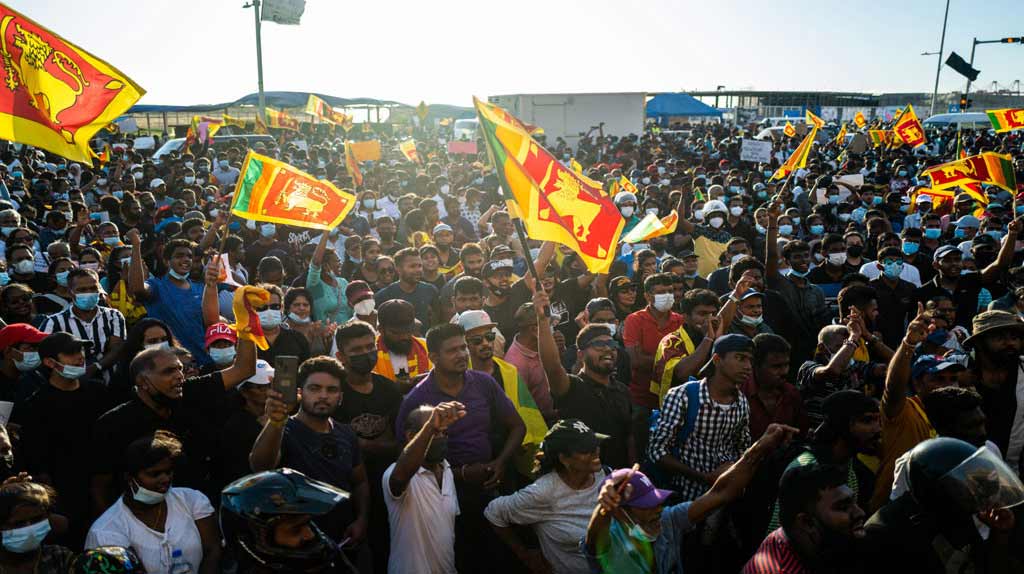 In October-November last year, the economic crisis in Sri Lanka had begun to intensify. Prices of food items including rice, pulses, vegetables, milk, flour and all other basic amenities like petrol, diesel and cooking gas started skyrocketing. There was a severe shortage of fuel. People had to line up for hours at the gas stations.

In Sri Lanka electricity generation is mostly based on combustion of fossil fuels. Except two, all the power plants were shut down in early April due to a lack of diesel. There is a power shutdown for at least 5 hours a day. Medicines for cancer and many important medicines, medical devices including intubation kits for children have exhausted. Hospitals began to reduce surgeries because the government did not have enough funds to import the necessary items. Examinations in schools and colleges were postponed due to inability to import papers.

A section of the people, who were unable to cope with the burden of the crisis, had left the country. Many Eelam Tamils started fleeing to Tamil Nadu with their families through ships. At the same time, anti-government protests which started as small sparks spread to many parts of the country. Initially they were symbolic protests of the opposition parties. Then the struggle intensified into people’s struggles.

After March 25, in various cities, people took to the streets and chanted slogans such as “Go home Gota”. Mass demonstrations were held in and around Colombo, especially at Reid Avenue, VMD Park, Negambo, Bandaragama, Nugegoda and Kohuwela Junction. It also gradually started to spread to other parts of southern Sri Lanka.

According to a report, it is estimated that 304 anti-government protests took place across the country till 19th of April. Most of them took place in southern Sri Lanka, with more than a hundred demonstrations taking place in and around Colombo alone. In particular, Colombo and the surrounding cities were emerging as the nucleus of the struggles.

Among the anti-government protests, the Mirihana struggle gathered the most attention. On March 31, the people of Mirihana , a suburb of Nugegoda, staged a massive demonstration. Then they started marching to lay siege to the nearby house of Gotabaya Rajapaksa. The protest began at about 6 p.m. The crowd kept gathering towards Mirihana till midnight. More than 5,000 people took part in the protests, mostly middle class.

The outcomes of the economic crisis, including the power cut and fuel shortages, forced even the middle class people to come to the streets to oppose the government.

This protest, which drew media attention, was the starting point for Galle Face. The Rajapaksas, who were unable to tolerate the mass protests against them, sought to pin down the protest from its outset. But they eventually failed.

A special police force guarding the President’s official residence and a mob of policemen tried to disperse the crowd using tear gas and water cannons on the protesters. In response, the people began throwing whatever they get towards the police. In order to suppress the protesting people the army was called in. Threats piled up from the President’s official residence to the media who came to cover the protests. The journalists were brutally attacked by the police. Their cameras were smashed. The 53 people arrested (till April 2) in regard to this protest includes journalists too.

By this violent means, they were only able to defend Gotabaya’s house but can’t suppress the protests. Protesters were sharing news of the protest and police repression on social media throughout the night. The hashtag #GotaGoHome became popular on the social media. These actions of repression by the State provoked the rest of the people. In the days that followed, the streets of southern Sri Lanka were inundated with people’s protests.

On April 2, the Gotabaya government declared a state of emergency and announced a nationwide curfew after dubbing widespread angry protests to be the work of “organised extremists” trying to create an “Arab Spring” by using social media.

All social media including Facebook, WhatsApp, Twitter, Telegram, Instagram, YouTube, Tik tok were abruptly disabled. Anuruddha Bandara was arrested for launching a Facebook page called “Gota Go Home”. As many as 660 people were arrested in a single day for violating the curfew. With such efforts the government tried to control and dissolve the protests.

But the protests got intensified. The oppressions by the government were futile. Despite the curfew, the streets were decorated with demonstrations. When the 53 arrested people in connection with the Mirihana protest were summoned to the court, more than 300 lawyers applauded and cheered them. No one left the court until the case was over. Doctors took special care of the wounded fighters. By understanding the boiling situation prevailing across the country, the Gotabaya government was forced into a defensive position as there is no other way. The social media blackout was released after 15 hours.

After looking into people’s intensified protests beyond State repression, the vote bank political parties were forced to pay heed to the people’s struggles. On April 4, hundreds of people led by the opposition leader Sajith Premadasa, marched on the capital city Colombo. On the same day, 26 ministers from the ruling coalition resigned en masse, citing that the mismanagement of the government was the reason for the cause of the crisis.

Opposition parties demanded the immediate resignation of Gotabaya and Mahinda Rajapaksa and the formation of an all-party interim government.

But the people were not impressed by the hypocrisy of the voting parties. According to a poll conducted by the “Centre for Policy Alternatives”, most protesters (55.9% of them) said that no political party is moral and all the 225 MPs should resign.  And 96.2 per cent of the population said that all politicians should be audited and all their unaccounted wealth should be confiscated by the State.

On April 5 and 6, mass protests erupted in various parts of the country beyond Colombo. The people hoisted black flags on their homes and vehicles, and emblazoned the cards containing the slogan “Go Home Gota” on their roof tops, and drawn graffiti condemning the government. The entire country was decorated as a warzone. On the one hand, despite separate protests in various parts of the country, a huge crowd began to flock on the Colombo coast after the 6th April.  Colombo seafront and the Galle Face near the President’s official residence were thronged with people. This panicked the government.

This was because Galle Face was already a symbol of class struggle. In 1953, a massive workers’ demonstration against the government’s move to cut subsidies on public welfare programs took place at the same venue. On July 23 of that year, about 2 lakh people – mostly workers – gathered at the Galle Face.  The Gotabaya – Mahinda government feared that a similar struggle would take place again and acted cautiously. 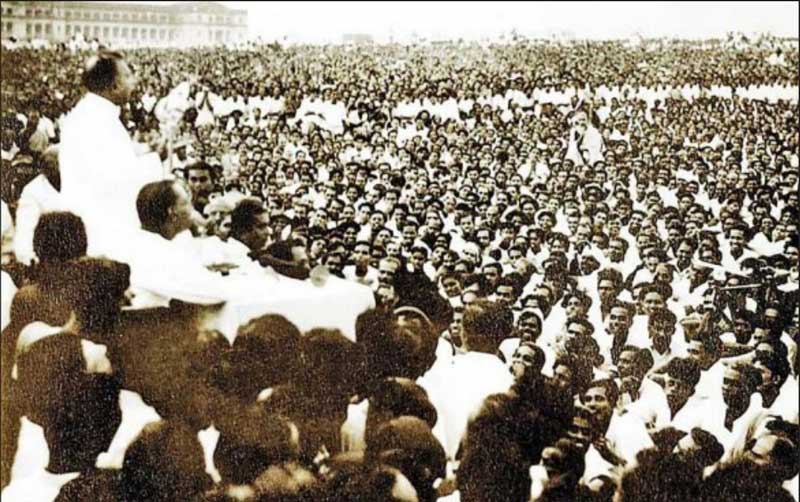 The government offered holiday for a week, instead of the usual two-day holiday provided for the Tamil New Year.  Colombo is a capital city and it can be compared with Chennai. Thousands of people from different parts of the country who stay in the city for various reasons including education and work usually return to their hometown during the holidays.  But what actually happened was contrary to it.

Tens of thousands of people marched from their hometowns to the Colombo seafront.  The government was stunned.  The government hired thugs to set ablaze the vehicles thereby orchestrating a riot. It was an attempt to evict the people by portraying the public as violators of law. The government’s tactics including sending letters to government employees to warn them, making false promises to pacify and divert people were of no use.

Barring all this, the spontaneously gathered people held a massive rally towards Galle Face and captured it.  Though the entire population of Colombo is 7 lakh, it is said that more than one lakh people attended the rally.

The Galle Face protest which is persisting for about 50 days could be easily understood if we compare it with Marina protest, Shaheen Bagh, Delhi Chalo…

People from all walks life, people who work for their subsistence usually join the protest site at Galle Face in the evenings after relieving from work. A section of people usually camp there. It’s a routine.  In an interview to the BBC, the Tamil auto-driver said, “I go to the protest site every evening; we will see the dawn only if we protest. It is exciting to see the people protesting together in this ground by uniting beyond ethnic and religious lines”.

Every evening, for the first three weeks of the struggle, about 40,000 to 50,000 people gathered at the Galle Face. Even today, thousands gather there.

Despite the severe economic crisis, food, tents and first aid supplies for the protesters are being donated by small businesses and some large corporations. Lawyers and doctors are ready to care for the people and fight alongside them.

Not only “Gota Go Home”, but also “We will drive out the State that oppresses the people”; “We will establish the rule of the people”; “History will pronounce verdict in the Supreme Court”, “Let us unite as Sri Lankans across caste and religious barriers” – these are all the multi-coloured expressions of the sentiments of the people that adorned the field of protest. These slogans were inscribed on various objects such as T-shirts, umbrellas and ribbons worn on the heads.

Photographs of journalists assassinated and disappeared by the Rajapaksa government from 2005 to 2015 were lined up in an area on the field of protest, as a way of commemorating them.

Some of them disguised as Mahinda Rajapaksa, pretended to be imprisoned by the protesting people. Galle Face looked like an art and literary festive stage as there were speeches, songs, paintings, dances and plays performed by the participants. As Comrade Lenin said, the revolutionary struggle is a festival of the masses.

On April 13, Prime Minister Mahinda Rajapaksa set up a delegation with the representatives of the Galle Face protesters to discuss their demands with the government. The people slapped down by saying that there was nothing to negotiate and they would not leave the Arakalaya (struggle) until he resign. 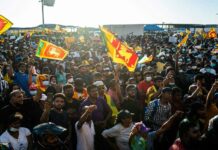 The uprising of the working people that shook Sri Lanka! – Part 2 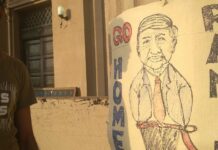 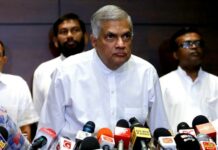