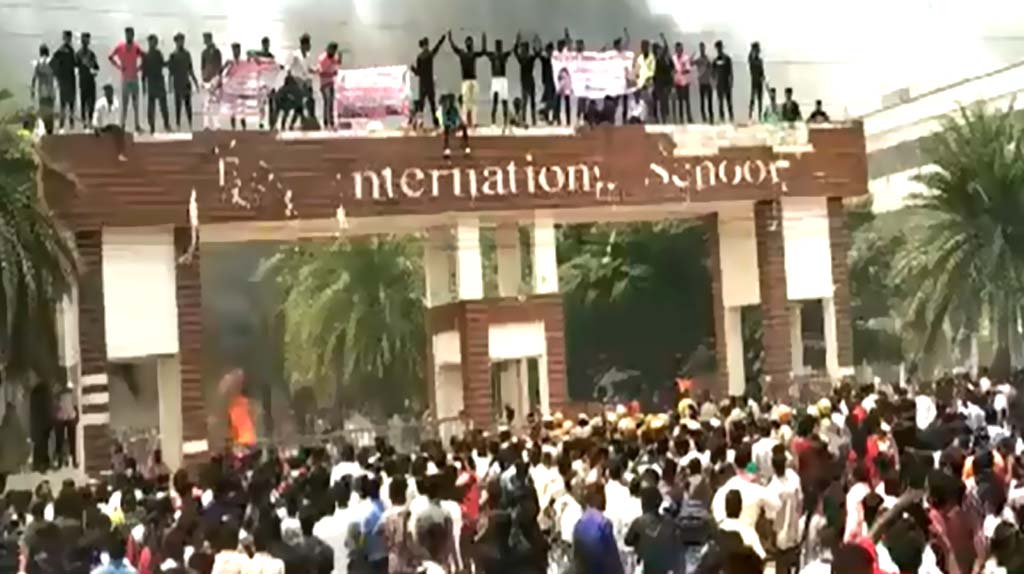 The Kallakurichi model is a form of struggle carried out by a part of the mass of people who have directly or indirectly gained various experiences from tens of thousands of spontaneous struggle models.

Sakthivel, the Principal of the school, is the administrator of Dheeran Chinnamalai Peravai, a caste-fanatic outfit of gounders. He was very close to Edappadi Palaniswami.  He recently joined BJP.  Moreover, RSS programs and shakhas are being held in the school.

Not only the mysterious death of the student Srimathi, but also seven other students are said to have died in Sakthi Matric School so far.  However, the death of four students were confirmed ones.  A student died after falling off a school bus; two students were fighting in the bathroom and one student was killed — these two incidents were accidents and hence can be passed over.  But the death of Class 12 student Prakash cannot be considered that way.

Prakash, son of Subramaniam of Nainarpalayam, Eriyur, died mysteriously in 2007. Even after 15 years, the case has not come up for trial. This exposes the relationship between the school management and the State bureaucracy.

When there was no reason to kill himself, the boy was found dead in a well about 2 kilometers away from the school. Not only his parents; no-one else can believe it!

Hundreds of people protested in front of the school demanding justice for Prakash’s mysterious death.  As a result, talks have been held with the school management.  Hundreds of gounder caste-fanatics with sticks in hand threatened from outside the negotiation room.  Finally the matter is settled by paying the parents a certain amount.

Support of the bureaucracy, support of the dominant casteists, RSS background – who would have expected that the protest that demanded justice for Srimathi would question the enormity of the private school.

All the struggles of Srimathi’s mother to perceive how her daughter died ended up in vain. The fact that the police and the bureaucracy are protecting Sakthi Matric School also got exposed.

The spontaneous student-youth protest in Kallakurichi reminds us of the jallikattu protest model.  Just as the students and the youth have organised themselves through social media during the jallikattu protest, various WhatsApp groups have been formed in the name of ‘Justice for Srimathi’ and they organised themselves against Kallakurichi Sakthi Matriculation School.

They have produced and disseminated many e-banners, short videos and recordings demanding justice for Srimathi. Placards and black shirts have been made ready on the protest day.  Among the youth of the area who participated, members of fan clubs were also included.

On July 17, when hundreds of protestors began demanding justice for Srimathi, road roko was conducted. This hundred has increased to about five thousand when students and youth joined the protest.  This changed the quality of the struggle and the struggle got  intensified. The continuous struggle of those who have been fighting for justice for the student’s death for 4 days, the police inaction against the school administration, and the RSS background of the school administration created a storm in the minds of the people which looted the school and set ablaze.

The protest was an act of revenge for the lives lost due to the privatization of education. Till now, Tamil Nadu has never seen such protest against the atrocities of private schools and institutional killings. It is not a common thing that the youth got spontaneously mobilized to fight against an injustice, that too from a relatively backward, casteist area called Chinna Salem and not from a metropolitan area like Chennai. This is a special feature of this protest.

Those ‘neutral’ speakers including many among us spoke of Kallakurichi as a violent struggle, RSS instigated struggle or struggle by anti-social elements without any logic. They are unable to grasp the fundamental rule that spontaneous popular struggle against injustice could take a violent form depending on the circumstances. Those who speak like this fall prey to the debate stirred up by those who prop-up the DMK regime;  On the other hand, they express their lack of trust in the people.

But the ruling class and the State knew better than us and sensed that a jallikattu style protest is propagating. Kallakurichi agitation has threatened them.  After this protest, by unleashing massive police terror, the State has openly threatened the students and youth of Tamil Nadu, who are fighting injustice with passion.

After the protesters dispersed around 12 O’clock, the police arrested more than 300 innocent youths, students and people from that surrounding for rioting. On the other hand, the gounder caste-fanatics, who could not bear the destruction of the symbol of their caste supremacy, conducted hunts in parallel with the police in the area and attacked other caste youths including the Dalits and Vanniyars;  Dalit youths in particular have been brutally attacked by them and were taken to the police.

The police searched for and arrested the students who created WhatsApp groups demanding justice for Srimathi.  The police broke the limbs of the youths and openly advertised that they had ‘slipped and fallen in the bathroom’.

It is impossible to count how many students have committed suicide, been murdered or mysteriously died in educational institutions in the last decade.  Because the government and the bureaucracy have turned all those murders into suicides. This gave a bonafide that privatization of education and the ‘noble’ education mafia has nothing to do with the killings that took place in these schools. Even in the death of Kallakurichi Srimathi, the bureaucracy is moving the case in that direction.

The entire political-economic policy of the State is privatization-liberalisation-globalisation, and this government can only defend it and enrich the corporates with these policies.  Only when we think from the perspective of how such a government could render justice to those killed by these private educational institutions, we can understand and also support the struggle against Kaniyamoor Sakthi Matric School.

Also Read : Droupadi Murmu, Illayaraja: Be traitor and get a Post!

The jallikattu model shows that lakhs of people can gather on the beach and bring the Modi government to its feet; Thoothukudi model shows that corporate Vedanta can be shut down if lakhs of people gather; The burning of fishermen’s huts in Chennai, the brutal attacks on people, the Thoothukudi shootings and subsequent repressions were all to prevent such methods of protest from spreading. These are models created by the police and the State to suppress people.

The Kallakurichi model is a form of struggle carried out by a part of the mass of people who have directly or indirectly gained various experiences from tens of thousands of spontaneous struggle models. Another model was the model of oppression that included police crackdown in collaboration with the casteist gang led by Rajasekhar against this Kallakurichi protest model.

We can only side with one of these two.  Because henceforth Kallakurichi model or an improved model will be the form of people’s struggle. When people’s lives are being robbed little by little every day, they will erupt like a volcano against the injustice. Those who support the anti-Rajapaksa model of struggle in Sri Lanka do not support the Kallakurichi model. Because caste and class influence their thoughts. The claims of these neutral heroes should be rejected.

Let us understand the intent of the bureaucracy to suppress the conscience against injustice by intimidation, and support the Kallakurichi model of struggle unconditionally! 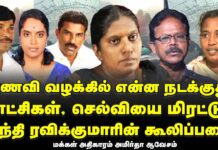 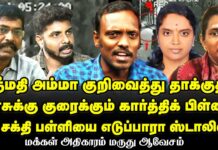